When I came to Louisiana State University, I had been trained in teaching and scholarship, but I learned how to become a citizen of a university from John Fischer. He was my senior colleague, an associate professor with tenure when I arrived in 1975. It did not take me long to learn that, amidst the rancorous and petty squabbles that all too often swirl around academic departments, John's was the voice of reason and fairness. I always used to joke that John was the only person I knew who spoke, not only in complete sentences, but even in complete paragraphs with topic sentences. Actually, this striking manner of speaking was the outward sign of John's fierce intelligence that penetrated through the fog of self-interest and special pleading to the central issue at stake in any departmental debate. It is not for nothing that John dedicated his scholarly career to the work of the great Anglo-Irish satirist, Jonathan Swift.

After years of wrangling, our department finally convinced the Dean that, instead of appointing a “head” to impose order, such a large and diverse department as English should elect its own Chair. Thus in 1992 John Fischer became the first elected Chair of the LSU Department of English. Since that election, English has become a model for successful procedural self-governance throughout the university. In an all-too-brief three-year term, John created a calendar of recurring tasks and deadlines that subsequent Chairs have up-dated and still use today computerized the departmental administration regularized the management of the departmental budget worked toward eliminating salary inequities convoked elections for a Planning Committee that evolved, during the chairmanship of his successor Jerry Kennedy, into an Executive Committee to advise the Chair on policy matters founded, together with his wife Panthea Reid, the successful public reading series, Readers and Writers, through which professors and community members share their love of literature.

I always knew that John was a superb Chair, but only when I became Chair in 2004 did I fully realize the extent to which the success of our department in the last 20 plus years is based on following John's steady, fair, and intelligent leadership.

To me, John was not just my mentor in chairing an English department. He was also a dear friend. We shared many a festive Christmas Day together, and my children still lament that our Christmases no longer include Panthea's Oysters Rockefeller. One year when Santa left two gerbils under the Christmas tree, my son named one after John. But the picture of John that I want to keep in my mind doesn't include small rodents. It includes a motorcycle. Although I did not know it at the time, I first saw John when my husband, Neal, and I were driving through a tropical depression from Atlanta to our new home, Baton Rouge, Louisiana. While we were sloshing down I-10 in pouring rain, suddenly a black motorcycle with a sidecar came out of nowhere and sped by. It looked for all the world like the kind you see in old World War II movies. Some months later we learned that John was the brave motorcycle driver who had zipped by us in the rain on his way back from a research trip to Florida. That's the image of John that I will treasure as I remember his brave life lived well. 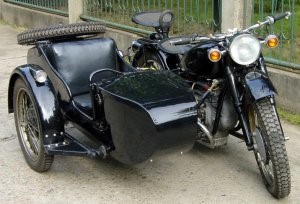