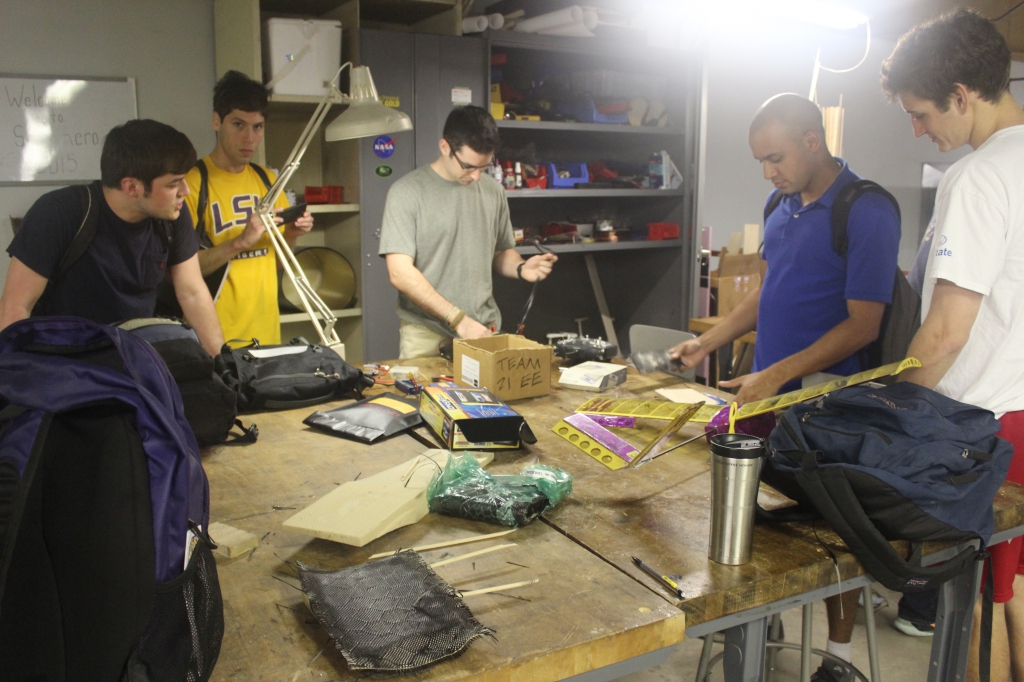 While most engineering students will spend the holiday break catching up on sleep or enjoying time with family and friends, members of the SAE Aero Design team—one of more than dozens of teams enrolled in the ME 4243 Capstone Design course—will spend their vacation building a plane.

They’ve arrived at this step in the process after months of work. Since the team was formed, in August, members have put together two presentations, one of which included a 50-page report; registered for the SAE Aero Design West competition, to be held in California in late April; adjusted their budget; met twice each week for three months; purchased materials; filled notebooks from cover to cover; and calculated and recalculated equations for the design of their miniature airplane. They’ve even come up with a team name: The Sons of Icarus.

The project, so far, has been mostly a success. The team members wrote a proposal that outlined the project timeline, budget, design, supporting equations and data, and they ordered some initial materials, like the foam for the plane wings and some electronics. They also used computer software, like XFoil, to “build their plane in a 3-D space.”

But there have still been a few hiccups—both small and large. The project’s budget, for instance, was cut by about $1,000, and they missed the registration deadline for the competition by a matter of minutes.

“We were supposed to sign up on October 4, and it was not a really smooth process,” said Cade Hoerner, a mechanical engineering senior on the team. “First, we were on the wait-list for about a week. Six minutes late for the registration, and we ended up on the wait-list, for both the east and west competitions.”

One week later, the team received notification that another team had dropped out. They were then eligible to pay the $800 registration fee to compete in the 2016 SAE Aero Design West competition. 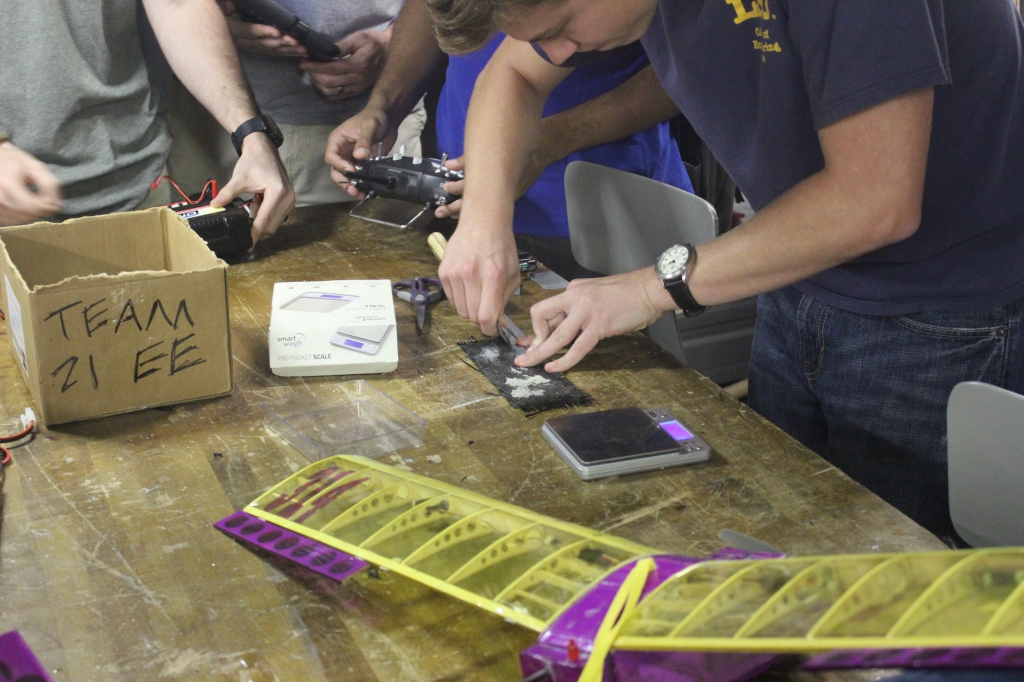 The plans to travel to California for that competition have also proved difficult, as the team members continue to debate whether they should fly there or drive 27 hours. Driving initially seemed cheaper, they said, but their final class presentation is just three days after the competition. Though they plan to simultaneously prepare for the presentation and the competition, this tight presentation deadline would not give them much time to practice.

And the plane’s design has been redone several times over to satisfy competition guidelines. “One hiccup we had was in thinking that we already had our weights figured out for the competition. Then we realized the metals needed to be a restricted size,” Michael Basham, another team member and mechanical engineering senior, explained. “We sort of assumed we could use steel, but at the restricted size, it wouldn’t be heavy enough for the competition.”

The team considered a series of metals, they said. Lead, which seems like the most practical material, is restricted by the competition, and gold is too expensive for the project budget. Tungsten is the only viable option, they said, and even that is more costly than expected.

“I’d much rather pay more money for the load score, than not do as well in the competition,” Basham said. “So, it's just one of the few hiccups here and there.”

The team has also planned some to test some of the things they know they will be scored and judged on during the competition, but some details remain unclear.

“The first thing is that the plane must be hand launched,” Hoerner said. “The goal is to have Tommy [LeBeau, who plays on the LSU Football team] throw it because you know, football, and we’re assuming he can throw it the hardest. So, we want it to go as fast as possible in the beginning, and it has to go 150 feet, make a turn, go another 150 feet and then, I’m assuming, land where Tommy threw it.”

The team also has to be able to assemble the plane, from start to finish, in a certain amount of time. The team has multiple opportunities to gain bonus points throughout the competition.

“The plane will be packaged in a tube and two people will be allowed to put it together,” Basham said. “You get a bonus if you do it in less than 150 seconds. So, that’s another thing we’ve been considering when we construct it. You also get bonus points for the consecutive amount of times you fly. So, you want to be able to fly it more than once.”

While the competition rules are specific, Hoerner said they do not tell the teams how many flight runs they have to make.

“It's pretty vague. We don’t really know. It kind of depends on the wind or something, I guess. We probably will just start flying and they’ll sort of tell us when to stop,” Basham said, laughing.

These ups and downs are all part of the process, they said, and the spring looks bright. Most of the team will have a lighter class load and fewer outside obligations, so they will be able to focus on and devote even more time to all that lies ahead for both the competition and the final presentation. 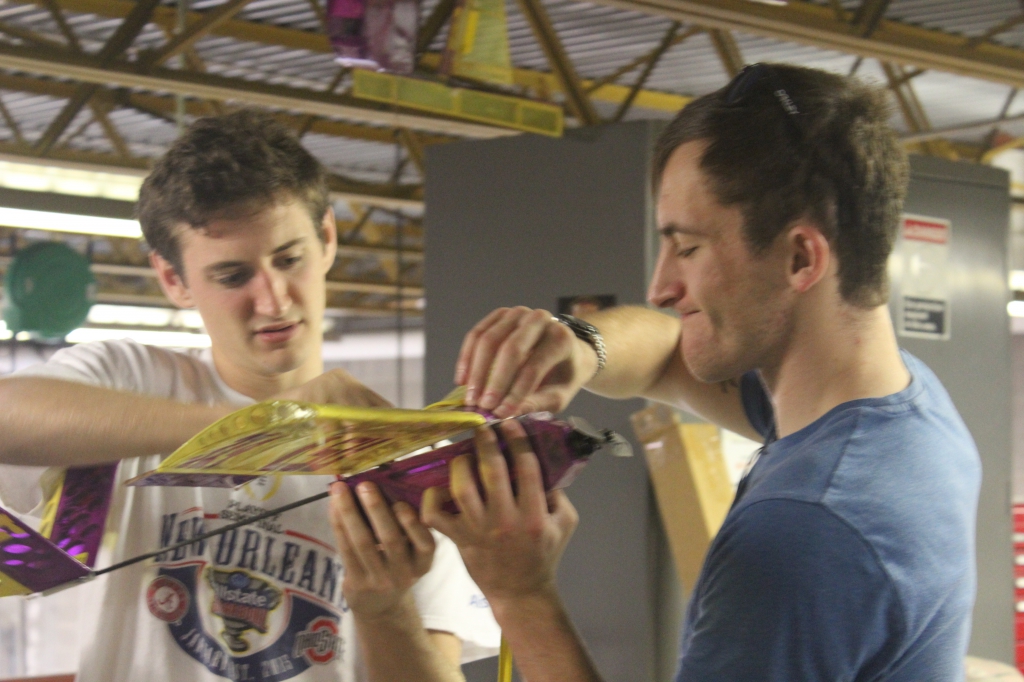 marissah@lsu.edu. Be sure to check out the LSU SAE Aero Facebook page. 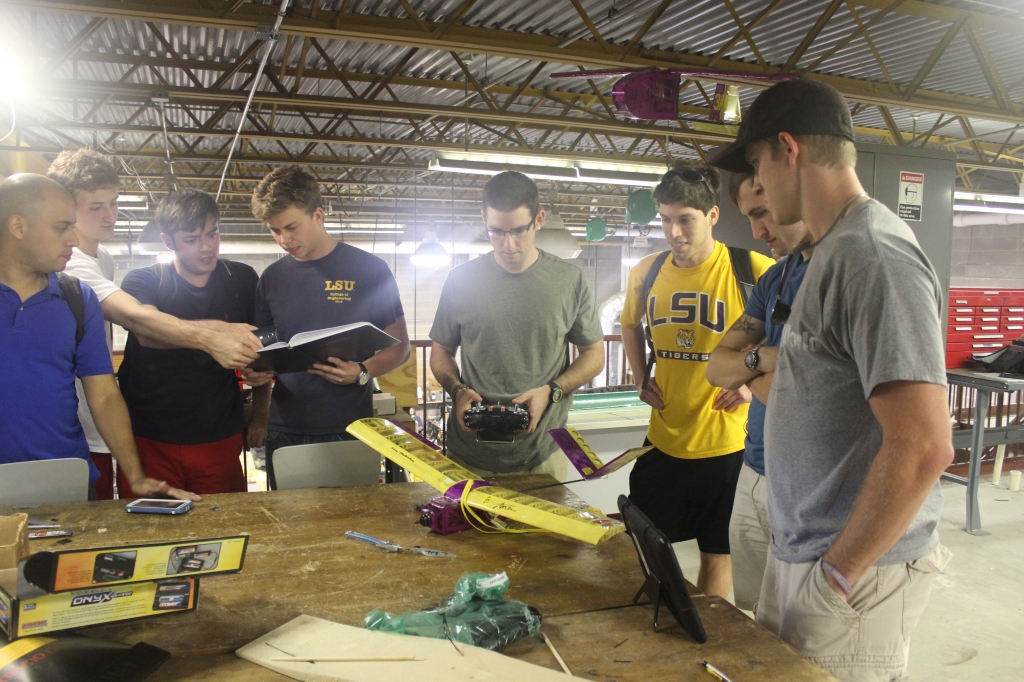